The PGA Championship, the second major championship of the men’s professional golf year, runs May 20–23 at the famed Ocean Course at Kiawah Island, South Carolina. Golf-watchers sometimes consider this tournament to be the “other” of the sport’s four majors, with less institutional prestige than The Masters, the U.S. Open, or the Open Championship. But it has produced some of the most enjoyable majors in recent years, usually with raucous crowds and entertaining finishes.

This week should bring more of that, as fans return to the course after being absent for the 2020 PGA Championship at Harding Park in the Bay Area. The Ocean Course is also one of the most stunning settings in golf—an added bonus for those of us watching. The first two rounds, on Thursday and Friday, will air on ESPN. The tournament shifts to CBS for the weekend’s third and fourth round broadcasts, and it concludes on Sunday evening.

The three questions below will shape how this year’s PGA Championship shakes out. Here’s who (and what) to watch this year.

Is Rory McIlroy back on track?

The most talented player in the world (apart from Tiger Woods) was playing well below his standards in the first four months of 2021. In his first nine events, McIlroy missed the cut three times—including at March’s Players Championship, a prestigious event he won in 2019—and didn’t even get to play the third and fourth rounds. He also finished in the top 10 three times but didn’t come particularly close to winning anything. McIlroy talked openly about how he tried to speed up his swing to match long hitters like Bryson DeChambeau and saw the mechanics of his swing suffer as a result, leading to ugly results.

But a switch flipped earlier this month, when McIlroy won the Wells Fargo Championship at Quail Hollow in Charlotte, his third victory at that course. The key for McIlroy was a brilliant week on the putting green, though on the final hole of the tournament, he hit this tremendous shot out of the rough on his way to closing out the win:

If McIlroy’s troubles are behind him, he might be the favorite at the Ocean Course. He has won the PGA Championship twice, in 2012 and 2014. The 2012 event was held at––you guessed it––Kiawah Island, where McIlroy blew away the field and won by eight shots at 13 under par for the week. McIlroy likes certain courses and plays them well, as he showed with his third win at Quail Hollow. If he takes to the Ocean Course like he did in 2012, watch out.

Who will emerge as a first-time major contender?

Each year at just about every major, a relative unknown challenges the bigger names on the course. At The Masters in April, it was Will Zalatoris, the heavy-hitting 24-year-old who finished one shot behind winner Hideki Matsuyama.

In last year’s event at Harding Park, it was Collin Morikawa, a 23-year-old playing in only his second major. Morikawa went on to win the whole thing. He is now widely regarded as one of the best players in the world and is, of course, the defending champ this week.

Fearless shot on the par 3, 17th sets up birdie for Brian Harman. He’s -12 and one shot back of the lead with one hole to play at The Players Championship! #DawgsOnTour https://t.co/6yENl7oXtv

A couple of candidates stand out as possible Cinderellas this week. One is Brian Harman, who has risen from the 91st-ranked player in the world at the end of 2020 to 48th today. The 34-year-old tied for second in the 2017 U.S. Open at Erin Hills, and he hasn’t won a tournament since that year’s Wells Fargo at Quail Hollow. But he’s finished in the top 18 in his last five tournaments, including top-fives at the highly competitive Players Championship and Dell Technologies Match Play. Harman has also emerged as one of the best putters on the PGA Tour.

Another possible breakout is Daniel Berger. He has won twice in the last year and seems primed to finish near the top of a major leaderboard. Berger missed the cut at The Masters but has otherwise been excellent lately; he nabbed a win at the Pebble Beach Pro-Am and a top-10 finish at The Players. Berger has been somewhat close a few times before, and he made a strong Sunday run at the AT&T Byron Nelson in Texas just this past weekend. Maybe it’s his moment.

Will the real winner be the golf course? 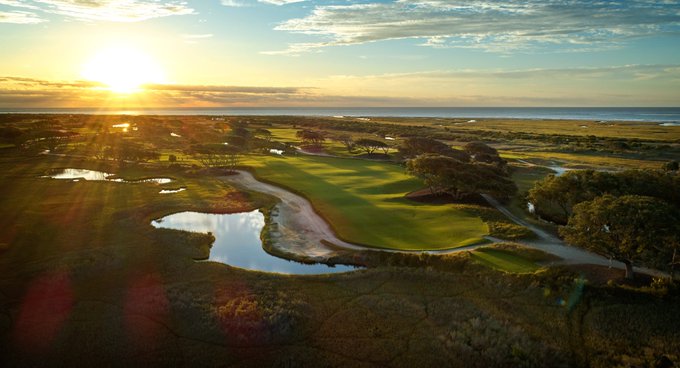 The PGA Championship isn’t the most difficult of the major tournaments. Truthfully, it’s closer to the easiest. It lacks the long distance and thick rough of many U.S. Open setups, the brutal weather of Open Championships in Britain, and the scary aura of being The Masters.

But the Ocean Course is different. When the weather isn’t ideal, it can be one of the hardest courses in the world. In the second round of the 2012 tournament held there, the field averaged 78 strokes (six over par) and only three players did better than par, an incredibly low number when the field is packed with the world’s best golfers.

The course is a product of famous designer Pete Dye. It sits right next to the Atlantic Ocean, which invites wind that affects the flight of the ball differently on each hole. Many greens are elevated on perches, which makes it difficult for players to get away with misses that might simply run onto the putting surface on other courses. There are also plenty of water hazards and dune areas to punish players who aren’t accurate.